Khotyn is a town in Chernivtsi region, situated on the bank of the Dniester river. Today Khotyn is one of the most important cultural and tourist centers of Bukovina.
The town has a long and rich history. It was originally a desirable place to live. At the Middle Ages Khotyn was famous throughout Europe for its markets and fairs. The lives of many prominent figures such as Moldovan hosts, Ukrainian Hetman and Cossack leader, Polish kings, Russian and Turkish military leaders, religious and cultural figures, poets, scholars, travelers are associated with this city. For centuries, Khotyn has been the scene of numerous military conflicts and the prominent battles of world empires. 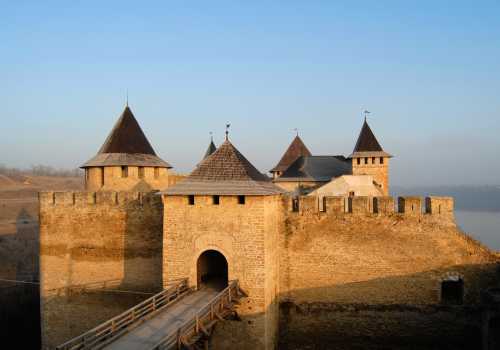 Khotyn Fortress
The pearl of the town is a world Khotyn Fortress - a monument to history, culture and architecture of XIII-XIX centuries. Fortress is a general, a priceless heritage for many people. Its walls have been the witness of many wars, they have seen victories and defeats, the rise and fall of empires.
Khotyn fortress has long attracted the attention of researchers, travelers and lovers of antiquity.
With walls up to 40m high and 6m thick, today's stone fortress was built in the 15th century, replacing an earlier wooden structure. Its location safeguarded river trade routes, making it a sought-after prize.
The huge statue of Cossack leader Petro Sahaydachny greets you near the fortress' entrance.
Inside the fortress walls there ain't a whole lot to see, but it's really the large riverfront grounds that make the place.