Trufanets waterfall
Awesome waterfall Trufanets is one of the Carpathian treasures and the highest natural waterfall of Zakarpattia. The height of the rock massif reaches 36 meters. The Trufanets makes an unusual impression, and those who happened to see it often call it as the most picturesque waterfall of the Ukrainian Carpathians. For the best view, a wooden gazebo reminding a forest fairy-tale house is constructed at the foot of the waterfall.
The Trufanets is located on the southeastern slopes of the Svydovets ridge, in 7 km from Kvasy village and 2 km from turning to the most alpine Ukrainian ski resort Dragobrat. It is impossible not to notice this beauty while driving along the Yasinya-Rakhiv highway.

Dragobrat
The ski resort Dragobrat is located is the highest ski slope of the Ukrainian Carpathians and has marvelous view on the highest mountain in Ukraine – Hoverla (2061 m). The lifts are mostly located on the slopes of Stih mountain (1703 m) giving you plenty of the adventurous options to ski. This resort gives you an opportunity to ski almost till May, as the climate here is quite special. Dragobrat is called the "carpathian Siberia", where the snow could fall from November to May. it is situated at the foot of the Stih (1705 m) and the Blyznztsia (1884 m) mountains, 10 km far from Yasinia.
For skiing and snowboarding, there are 10 km of slopes available. 13 lifts transport the guests. The winter sports area is situated between the elevations of 1,400 and 1,703 m. 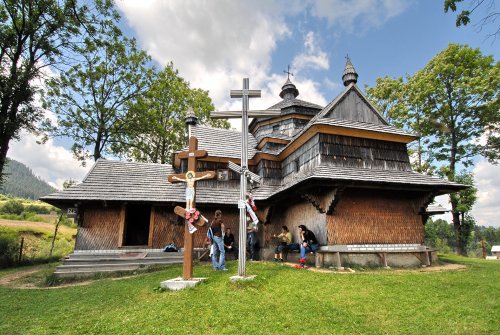 Church of the Ascension of the Lord
Church of the Ascension of the Lord (Strukivska Church) in Yasinia is one of the best preserved Hutsul churches. A magnificent and at the same time very modest temple is fascinating with its perfection and unpretentiousness, in contrast to the contemporary gilded pompous Zakarpattia temples. In Zakarpattia, this type of ancient architecture is rare. The church in Yasinia was built in Hutsul style, but under the Galician influence such churches in Zaksrpattia are only two - in Yasinia and in Lazeshchyna.
Strukivska Church is considered one of the best wooden churches in Western Ukraine. It is the perfect example of the Hutsul tradition. Built in 1824, this church, together with other wooden churches of the Carpathians, is included in the UNESCO World Heritage List. Near the church there is an old cemetery and a belfry built in 1813.